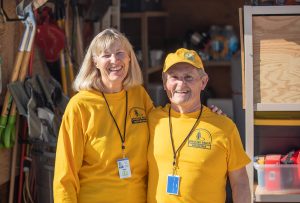 David and Sue Cook, Arizona Southern Baptist Disaster Relief volunteers, are accustomed to messy projects. They have searched in freezing temperatures and snow for people’s belongings in the rubble and ashes of Colorado wildfires.

On March 28, the Cooks will face uncharted territory in Warsaw, Poland.

As of March 21, the U.N. Refugee Response Agency estimated more than 2.1 million refugees had crossed the border from Ukraine into Poland.

As part of a 10-member team from North Carolina Baptists on Mission, the couple will work alongside pastors and churches, serving refugees from Ukraine. For two weeks, their responsibilities will involve cleaning bathrooms and showers, washing sheets and bedding, and sorting and distributing donations.

“That was the list we were given, but we were told we might be doing something else instead,” Sue said.

“A flexible attitude is going to be very important here,” David said.

This mission is personal for Sue.

“My grandfather migrated to the United States from Ukraine,” Sue said. “I have a heart for that area. I remember some of the stories he told, and I’ve been trying to see how I could do my part.

This is an opportunity for David and me to serve there.”

It’s personal for David, too.

“When my boys were young, I spent a lot of time with kids, mostly involving sports,” he said. “I was with a lot of single-parent families, so I’ve seen how separation affected kids.

“These Ukrainian kids have been yanked away from everything — from their homes, their parents, their grandparents. This really tugs at my heart. I know I can’t change the world, but if I can just make a difference to someone over there, if I can show them the … love of God, and what He holds in store for them, I think that’s going to make a huge difference in the outcome.”

Both David and Sue have been heavily involved in GriefShare, a Christ-centered grief recovery support group program. They go prepared to listen and offer Christ’s love.

“You look at these folks [who have] lost everything,” Sue said. “They are grieving. They are heartbroken and probably filled with anguish. I truly believe that God can be their source of comfort during this time. And, if we can lead them to a life-changing relationship with God, wouldn’t that be amazing?”

Although Sue is an Arizona Disaster Relief chaplain, she may not be formally serving in that capacity. But she is trusting God will give her the words to comfort those who are stressed and anxious, those who have no idea what their future holds.

David recently became a deacon at Calvary Baptist Church in Lake Havasu City, where they worship and serve. Their pastors and congregation will be praying over them the Sunday before they leave for Poland.

“We are grateful for all the support we are receiving from our church and our community,” David said. “We know we are not alone.”
Sue and David ask for prayers for all the individuals on their team and the ones that will follow.