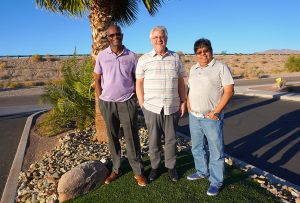 “Restore” was the theme of the meeting held at Calvary Baptist Church in Lake Havasu City, Nov. 12. It was attended by 173 messengers and 41 registered guests.

Last year, messengers adopted a recommendation from the AZSBC Convention Council to vote at the 2021 annual meeting on changing the convention’s name to “Arizona Mission Network of Southern Baptists.” This allowed time for prayer and discussion.

When the business item was presented this year, Ted Finkbeiner, pastor of Bouse Baptist Church in Bouse, made a substitute motion that the name be changed to “Arizona Southern Baptist Mission Network.” The initial wording was “awkward and clumsy,” he said, and putting “Southern Baptist” close to “Arizona” was “a more direct name change.”

Six other messengers spoke for and against the substitute motion, with some wanting to emphasize the missional aspect and looking toward the future, while others were concerned about losing “Southern Baptist distinctives.”

After AZSBC President Jack Marslender said the substitute motion failed on a show-of-hands vote, a ballot vote was called for. The substitute motion passed 78-52. The new name is a “doing business as” name change and will not change the constitution or corporate filings.

Before the vote, AZSBC Executive Director David Johnson talked about the rationale for the name change in his Centennial Vision report.

“We want a name that reflects who we are and what we do,” he said. “We are churches in Arizona. We have gathered together to be on mission, because God’s given us a mission to accomplish. And we’re a network of churches.

“A lot of times, ‘convention’ really doesn’t resonate with people. It seems to reflect a structure that really doesn’t identify us. But as a network of churches, we want to be able to help each other, working together in this mission.” 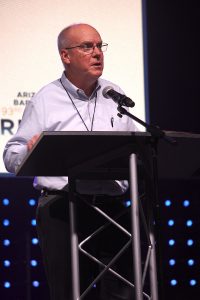 About 62% of Arizona Southern Baptist churches turned in their Centennial Vision (Annual Church Profile) reports last year, Johnson said. He urged churches to turn in their reports this year “so we can know how we’re doing and know how we can best go about our ministries.”

In his challenge to Arizona Southern Baptists, Johnson told about attending the International Mission Board’s Sending Celebration Nov. 8 in Columbia, South Carolina, where a couple with Arizona ties and a personal connection to his family were among the 39 new missionaries who participated.

“We settled for sending trinkets in shoe boxes instead of sending missionaries in shoe leather,” Johnson said, paraphrasing a statement made by IMB President Paul Chitwood at the Sending Celebration. Continuing the paraphrase, he said, “I’m not speaking against sending things to people … but the gospel always travels with people. It travels person to person. … Don’t put your passion for missions in a box. Don’t assume that you’ve done your part by sending a box.”

We need to raise up, call out and send people from our churches, and we need to give resources to send and support them, he said. “We need to do all that we can: giving sacrificially, sending and going.”

“I know there’s a lot of talk about what’s going on in the SBC,” he said, noting he receives questions and emails. “I’m distressed just like you are, but I want to tell you something today. It doesn’t matter what’s going on in the SBC. Mission matters most. … We cannot, we must not, let anything take the place of missions in what we do. We must give, pray and send, because mission matters most.” 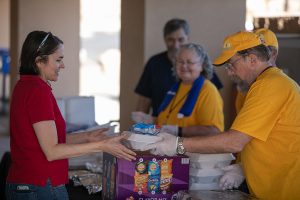 The Cooperative Program budget allocates $1,421,342 or 39% — an increase of 2.5 percentage points — to the Southern Baptist Convention for national and international missions and ministries.

The percentage increase represents another step in reaching Arizona Southern Baptists’ Centennial Vision goal of giving 50% of Cooperative Program receipts to missions outside the state through the SBC by 2028. It’s the eighth consecutive year for an increase, resulting in a total rise of 13 percentage points.

Income sources in the AZSBC operating budget beyond Cooperative Program giving by Arizona churches include $319,500 from the North American Mission Board, $305,055.03 in fees and other revenue, and $18,000 in trust income for the Cooperative Program.

Jack Marslender, senior pastor of Avondale Baptist Church in Avondale, was elected to a second one-year term as president.

A motion made by Larry Deskins, senior pastor of Gateway Fellowship in Gilbert, that the AZSBC “form a team to look into the accusations against NAMB concerning CRT leanings” was referred to the Convention Council. The council will form a team and report back to the convention, Marslender said. 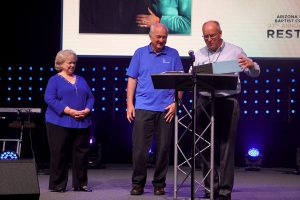 Johnson presented Tommy and Laura Thomas with a lifetime achievement award upon the recommendation of the executive team and approval of the Convention Council. Tommy Thomas, who will retire later this year, is a church planting catalyst serving northern Arizona through the North American Mission Board. During his 40 years of ministry in Arizona, he also served as church planting missionary and director of missions for River Valley Mission Network in northwestern Arizona and a pastor.

Johnson described Tommy Thomas as “creative, visionary, and what I call, ‘he followed the Experiencing God, Henry Blackaby’ method. It wasn’t that he had some magic formula. He just had a way of sensing where God was working and where there was a need, and he put those together and God did the rest.” Through all the years, Laura has been at Tommy’s side, supporting, praying, going with him on many occasions and other times being separated because of the work, Johnson said. 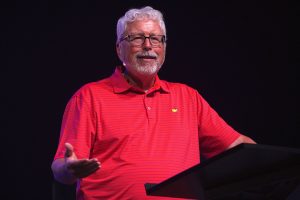 Using 2 Chronicles 15:8-17 as his text for the closing message, Chad Garrison, lead pastor of Calvary Baptist Church in Lake Havasu City, noted that Asa was a good king who did good things, but he left the high places intact. “Potential hidden high places in our ministries that could be sabotaging our efforts as good kings” include three idols he said he’s seen “in the Southern Baptist church world.”

–The idol of preference. This happens “when we elevate our preferences over the mission of Jesus,” he said.

–The idol of plans. You know plans are an idol when you try to control outcomes or people, or when you become angry when your plans don’t work out. “God’s plans are better than my plans every single time,” he said.

–The idol of provision. “I learned early in ministry that people use money to try and control leaders and inhibit the mission,” Garrison said. Be generous personally and corporately in your church, he urged.

Calvary looks for ways to bless people and bless the community, Garrison said. Last year, the church gave more than $300,000 through the Cooperative Program, but that was less than half of what Calvary gave to missions.

“Total missions giving last year was right around $750,000, and that’s what we get excited about,” he said.

Being a good king “means that I’ve got to look in my life and in my church and see what kind of high places are there,” Garrison said. “And then when I find them, when God shows them, we’ve got to tear them down so that we can be better kings and God can use us to make a difference in this world.” 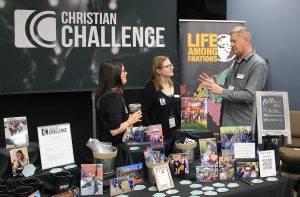 Earlier in the session, Julio Arriola, executive director of Hispanic relations and mobilization with the SBC Executive Committee, praised and encouraged Arizona Southern Baptists for their giving through the Cooperative Program, which will be 100 years old in 2025.

Arriola told about the six strategic actions of Vision 2025, which was adopted by SBC messengers last June. He invited Arizona Southern Baptists to join 10,000 others as part of the prayer team by texting VISION to 90885 to receive weekly prayer prompts.

Prior to the afternoon session, Arizona Southern Baptists participated in a mission fair and a morning Pastors’ Conference, along with lunch cooked by Arizona Southern Baptist Disaster Relief. The day before, many attended a getaway day that included morning recreational activities and an evening worship service. The day was hosted by Calvary Baptist Church.

Next year’s annual meeting will be Nov. 11 at Avondale Baptist Church in Avondale.

Videos of the annual meeting may be viewed at vimeo.com/showcase/9031534.