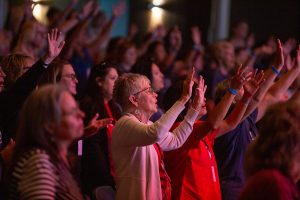 There’s no place like Sedona for a girls’ getaway.

On Friday, Sept. 30, and Saturday, Oct. 1, the city hosted about 650 women for the third annual Arise AZ Conference.
This year’s theme was Hope Has a Name.

“Our main hope for the conference was that when women got there, they would be able to lay all of their worries from the last two-and-a-half years behind them and focus on the future and what God is doing around them and through them,” said Shannon Jennings, the women’s ministry leader of Arise. The goal was for participants to realize “they could have hope in Christ more than the hope we put in the things we have found out go away so easily.”

Kristen Knight attended the conference for the first time this year with a group from First Southern Baptist Church in Springerville. She is part of a Bible study at the church and said she decided to go to Arise after receiving an invitation to attend. 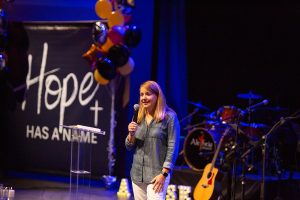 The experience was emotional and powerful, she said, with biblical truth laced through everything.

“You could feel it in there,” she said of the worship and teaching. “Jesus was in there. And that was so awesome.”

Jennings said the weeks leading up to the conference brought significant challenges, with multiple conference leaders experiencing family deaths, along with volunteer flight cancellations due to Hurricane Ian and a vehicle rental that fell through.

Before the conference, Jennings said she spoke with Catherine Renfro, a conference speaker who was planning to share the Gospel and lead people in response.
“We had been praying together and she was aware of the spiritual warfare going on…” Jennings said. She recalls how on Saturday morning, before Renfro went on stage, she shared with Jennings her anticipation that God was about to do something big. 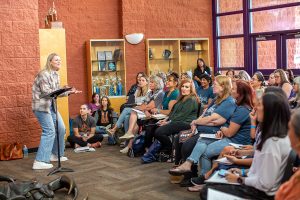 That day, at least 25 women made first-time commitments to follow Christ, with many others making other decisions and recommitments, Jennings said.

Of the almost 20 women who spoke during main or breakout sessions, all were from Arizona, with the exception of Renfro, who is the Georgia-based director of evangelism for the North American Mission Board. The event was also organized primarily by eight women from churches across the state, with worship led by Aletheia Church’s band.

“The Lord has blessed a lot of women (in Arizona) to be amazing women for Him, and we want to make sure we utilize the women who are close by and know Arizona women and what Arizona women are going through,” Jennings said.

The conference also offered three breakout sessions in Spanish, along with complete Spanish translation for all main sessions and a booklet with Spanish lyrics for all of the worship songs played.
Since the first Arise conference in 2020, the conference has created a place for “women to come together, worship together and reconnect with each other and to also reconnect with the Lord,” Jennings said. 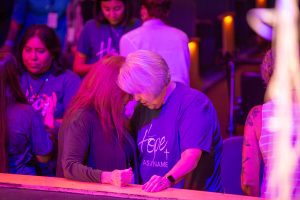 Knight is already pondering and praying for who she might invite next year — she wants others to know the same peace she experienced this year.

“It’s awesome to see so many people who experience the same doubts and the same down times,” she said. “But it all comes back to: It’s OK. Jesus is there.”

Rebekah Hlasney, owner of Rebekah Gonzalez Photography, is a member of Aletheia Church in Sedona.