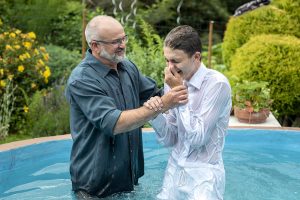 Your church’s gifts through the Cooperative Program go to support missions and ministries in Arizona, North America and around the world. IMB Photo

In the midst of a pandemic, Arizona Southern Baptist churches proved themselves faithful in missions giving in 2021.

“In addition to that, we were able to increase our support of missions and ministry efforts in Arizona as well,” he continued, “What a blessing to be a part of a network where missions is not just in the name but at the heart of all we do!”

In 2022, with an Arizona Southern Baptist Mission Network Cooperative Program budget goal of $3,644,213, the percentage increased to 39%. This year marks the eighth consecutive year for an increase, resulting in a total rise of 13 percentage points.

The entire offering provided a Helping Churches in Crisis Fund used to assist churches during the early months of the Covid-19 pandemic.

Gifts to the Lottie Moon Christmas Offering for International Missions were $767,556, down $63,760 (7.7%) from 2020. Last year marked the second consecutive year for a decline in the offering. Arizona Southern Baptists gave more than $1 million to the Lottie Moon Offering in 2019.

However, the apparent two-year slide may be a matter of timing, said Kathy Keller, business administrator with the Arizona Southern Baptist Mission Network. Churches are still sending in their gifts from the 2021 Lottie Moon Offering, she said, but gifts received after Dec. 31, 2021, are not reflected in the 2021 total. They will be included for 2022.

The January 2022 total for Lottie Moon is $110,000 more than January 2021. Furthermore, if the last three years of Lottie Moon giving are compared from February-January rather than the calendar year, giving in the past 12 months was higher than either of the previous two 12-month periods.

Resources are available to help share the Cooperative Program story with your church.

CP Stories can be used during a worship service to tell a brief missionary story. The stories for upcoming Sundays, along with printable bulletin inserts and PowerPoint slides, are available here.

In addition, a number of Cooperative Program are available to download and share with your church here.