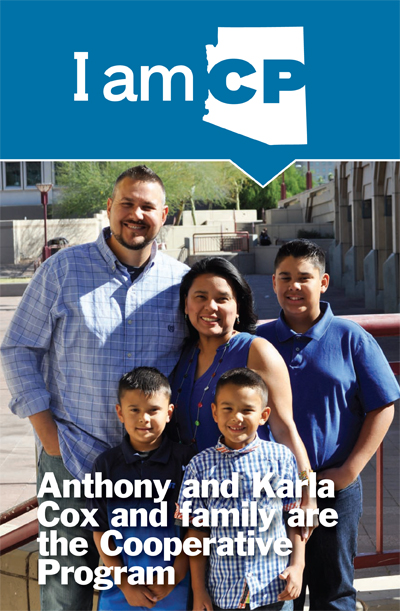 Because of the Cooperative Program and God’s call, I am a church planter in downtown Phoenix, where I have a diverse, challenging mission field. I am planting Mercy Hill Church.

I encounter people such as Carlos, a Hispanic artist who is well known for his large murals along alleyways and high-rise buildings. He is considered a bridge-builder in this city.

James is an African-American entrepreneur, community developer, and friend to many in downtown Phoenix. He is an agnostic, due to bad experiences with religious institutions.

Davida is a single mother who recently went through a difficult time. She lost her job and faced the prospect of homelessness.

My wife, Karla, and I are planting a church among people such as these because God challenged us through a CP missionary and a director of missions from Phoenix.

Karla and I had been seeking God’s leadership for our lives when we met Monty Patton, a CP missionary serving as the North American Mission Board Send City coordinator for Phoenix-Tucson, and Bruce Ford, director of missions for Central Association of Southern Baptists in Phoenix.

Our hearts were compelled to go to downtown Phoenix to plant a church. We are here because of God’s call and CP support, which comes from thousands of committed Southern Baptist churches.

My ministry skills are being sharpened by studies at Gateway Seminary, a CP- funded school. I am enriched in a New Testament class taught by David Johnson, executive director of the Arizona Southern Baptist Convention, also funded by the CP.

David is right when he says, “We can do what we do because every dollar comes from a Baptist.” Your giving has a kingdom impact!

We are Anthony and Karla Cox, and we are the CP.