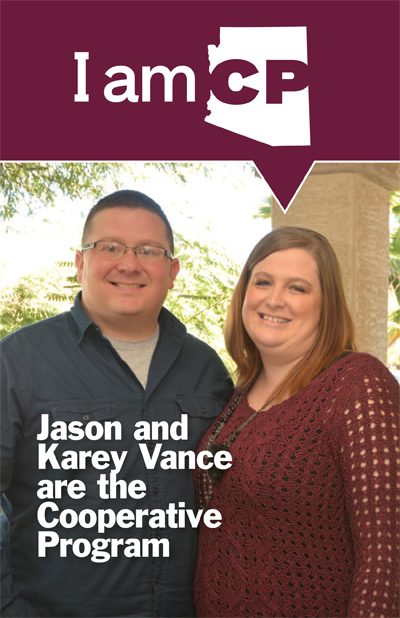 “Does anyone besides your mother think you should do this?”

That’s one of the questions Jason Vance, then-director of missions for Mullins Baptist Association in Oklahoma, asked as part of a team interviewing potential church planters.

Now, the shoe is on the other foot: Jason has been called to plant a church.

“The way you know you’ve been called is the desire doesn’t go away,” he says. “But that desire has to collide with the opportunity to plant. It takes both real opportunity and affirmation.”

When Jason and Karey met in a church youth group in their native Oklahoma, little did they know they would marry, much less eventually start a new church more than 1,000 miles away in a suburb of Phoenix.

God called Jason to be a pastor and, in time, to associational duties. Now, thanks to the giving of Southern Baptists through the Cooperative Program, which helps pay Jason’s salary and rental space for Valley Life Church – Surprise, he can focus on just one church.

In 2014, the Vances moved to Surprise, where a small group began with a list of 100 unsaved friends.

“About a year in, I’m sitting in a community group surrounded by people who were on that list who are now saved,” he recalls.

“And now those people have invited more people who have been saved and baptized,” Karey adds.

“This church plant was an idea and a dream until Southern Baptists made it a reality,” Jason says.

“My friends are becoming Christians and inviting their friends to Valley Life because the Cooperative Program is funding the Great Commission,” a grateful Jason Vance says.

Jason Vance is the CP.